Choosing between a 144Hz or 240Hz monitor to buy is more difficult than it looks. That’s because you need to consider a lot of factors between buying an appropriate monitor.  So, what’re the differences between the two monitors: 144Hz Vs 240Hz?

Firstly, know that a 240Hz Monitor is more expensive than a 144Hz Monitor. Since the refresh rate for the 240Hz is better, it’s more suitable for competitive gaming. Finally, for simulation-based and casual multiplayer gaming, you can play using 144Hz without any limitations.

Don’t worry, that’s not all that we have for you. Our in-depth and craftily designed comparison will meet any further queries you may have. So stay tuned!

The higher refresh rate of a monitor, the more the frames per second that your monitor can display. A monitor with 240Hz gives you a more responsive experience with great visual quality.

But with the differences in affordability between the two, is buying a monitor with 240Hz really worth it? Try to think about your purpose of buying. We will now provide you with a quick comparison chart below-

For greater visual performance and better responsiveness, a 240Hz monitor costs a lot more than a 144Hz monitor. One of the reasons for it having a  commercially higher price is because a higher refresh rate governs the greater number of frames-per-second.

However, while you get to enjoy extra advantages for the higher refresh rate, there is a chance that your PC might not be able to handle the update. If that happens, it will result in a total waste of money on your part. After all, you would want to hit the target performance.

Moreover, when 60Hz monitors were more commonly used, the huge differences in the monitors of 60Hz and 144Hz were apparent. But this isn’t the case between the 144Hz and 240Hz monitors. There isn’t much difference between the smoothness of the screens.

That is why, if you’re not seeking a monitor for professional gaming, a 240hz monitor is usually less recommended in terms of affordability. So, think of your purpose of the purchase! 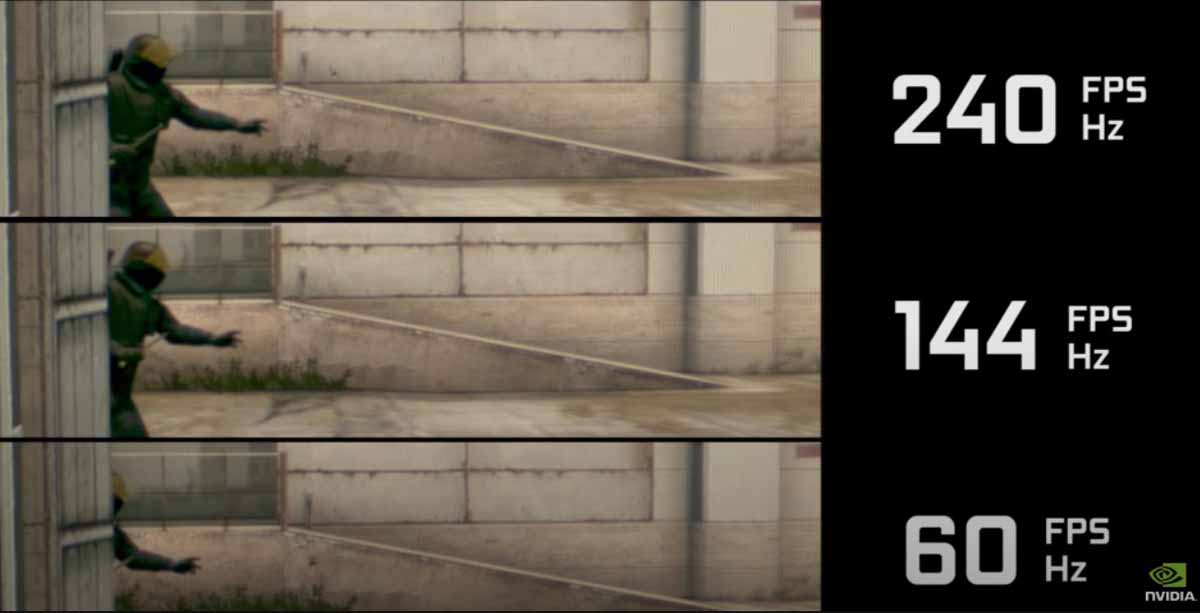 There are certain prerequisites that need to maintain for your monitor to be able to utilize the high gaming performance.

A higher refresh rate results in the images on the screen being updated a greater number of times. This results in smoother transitions between images, more visual experience, and greater responsiveness. The differences between 144Hz and 240Hz monitors are more apparent with greater games’ difficulty, especially competitive ones. So, if you’re a professional gamer, a 240Hz monitor is perfect for you!

Simulation-based gamings are games that are usually played at a slow pace. For these types of gaming, even a monitor with 60Hz works fine! People who play such leisurely games often invest in other PC parts, such as the monitors’ resolutions. So, between 1440p 144Hz vs 1080p 240Hz monitors, which one wins in this case? The former one, of course!

The number of frames-per-second that a PC can allow is determined by the PC’s Graphical Processing Unit (GPU). So, to allow a higher frame-rate for a 240Hz monitor, for example, you’d need a strong GPU. So, before buying a 240Hz monitor, you must invest in a GPU and upgrade it according to the frame-rates required for your game. Remember, your monitor will be rendered useless otherwise.

G-SYNC or FreeSync are pieces of technology that are made to make up for the lagging caused by the differences between the monitor’s refresh rate and the GPU’s output frame rate. The issue is called “screen-tearing”, and a G-SYNC successfully solves this issue. Using a G-SYNC is sometimes said to cause input lags.

However, if you choose to buy a 240Hz monitor for which you need a G-SYNC in the first place, the input lag shouldn’t be that noticeable. So, in order to enjoy a smoother gaming experience on a 240Hz monitor, a G-SYNC is a great help that would greatly decrease the screen tearing to a great extent.

How big is the difference between 144Hz and 240Hz?

Well, the differences between 144Hz and 240Hz aren’t as big as those between 60Hz to 144Hz. The jump in terms of a smoother and more responsive experience results from 60Hz to 144Hz than from 144Hz to 240Hz.

Is buying a 240Hz Monitor an overkill?

Buying a 240Hz Monitor is overkill if your Graphical Processing Unit has lower specs. If your GPU has lower specs and wants to use a 240Hz monitor, please upgrade the card instead. If the frame-rates that it outputs regularly is 240 frames-per-second, then a is perfect.

So, both 144Hz and 240Hz have their advantages and disadvantages. The main factor of deciding between the two will lie in your purpose of buying your monitor.

That is why, before you choose one, keep in mind that a 240Hz monitor is more expensive and well-suited for competitive gaming. Also, a 144Hz monitor is affordable and good for playing casual multiplayer games and leisurely simulation-based games. So, make your choice wisely!

We hope this article pointed out the key factors and has helped you decide. Let us know about your decision in the comments below! Good luck!

How To Check FPS and Ping In PUBG...

How To Boost PUBG FPS For Improved Performance

IPS vs TN vs VA Displays: Which Are...

How to Overclock Your Monitor for Higher Refresh...

What Is Monitor Ghosting: How to Fix and...

Monitor Shuts Off When Playing Games: How to...

How to Connect an Xbox One to a...

What to Look For in a Gaming Monitor?...